With the frame repairs completed we turned our attention to replacing and strengthening the thwarts.
The Cutter has five transverse thwarts and would have originally had side benches linking them all from bow to stern and in each after quarter there would have been a small locker on each side.
Firstly it was decided to renew the thwarts which are currently softwood that is too narrow but excessively thick.

Some suitable Utile was obtained and machined to the required section of 10" by 1 1/8".

I started with the forward thwart and my buddy worked on the sternsheets where the seating is double-width.

Then we made the forward and midships thwarts and a start was made on building a new bulkhead in the original midships position. On the plans this is shown as being watertight and as the boat's bilge would have been in two sections there is a second drain plug immediately forward of the bulkhead. To simplify things - and to negate the need for two bilge pumps - I elected to cut limber holes in the bulkhead to allow drainage.  If absolute originality is required these could be plugged.


Another job that was carried out now was the strengthening of her sternpost.  During a conversion into some form of cabin cruiser they cut a slot in the transom to install a tiller for wheel steering via wires and sheaves. This slot had cut right through the sternpost weakening the upper part of her transom.  As the sternpost is otherwise in good condition we decided to fit doublers to it and fill in the gap; not pretty but it gives the transom some strength back.

The Motor Cutter has these identification markings carved into her hull. They appear to be boat number, length, date, and presumably a dockyard i.d. mark. They are carved into the starboard side of the stem post and on the inside face of her transom. The transom markings will still be visible between the aft quarter lockers built into the sternsheets.

An initial assessment of the boat showed that she had fractured timbers (ribs) along both sides roughly at the turn of the bilge where the heavy floor timbers end. These are 3/4” by 1” with a radiused inner face. The timber appears to be Canadian Rock Elm but unavailability of this meant that I sought some unseasoned English Oak and a source of this was found nearby.

The oak boards were sawn down, planed and had the radius routered on.  They needed about forty minutes in the steamer before being bent in. We clamped and wedged the replacement frames alongside their broken originals and left them until the following weekend.

A section of each broken frame was marked and fastenings cut off and driven-out before the section was cut away using the 'multi-tool' and a scarf made on the remainder.  Each new frame was scarfed to fit. Then when ready the scarfs were glued and the frames re-fastened using the original nail holes. As she is planked in hard wood I kept to the original 10-gauge nail.


Whilst this work was going on I was also stripping the paint off her bottom. A filthy horrible job since she had been tarred to preserve her by a previous owner. Badly neglected there must have been some areas that had been bare for a while and there is abrasion and barnacle marking here and there. Stripping also revealed that she has had planking repairs carried out in the past; starboard side amidships; port quarter and by her stem on starboard side.
We also started plugging some of the holes left by removed skin fittings - and there are several all over the hull.  Here my buddy is filling up where a massive exhaust outlet was once installed in her transom. Left over from a now-removed engine.

I have been fortunate in being able to obtain an original engine for the boat of Dorman-Ricardo type 2DSM that this boat almost certainly was fitted with when originally built (plus another spare one!). Here is a page from the engine manual showing the installation in a 25ft Cutter:

After a busy summer of sailing and boating during which I have refurbished a plywood Miracle sailing dinghy for my grandsons to sail, I have made a start on a pending project in the shape of an ex-Admiralty 25ft Motor Cutter:-

She had been on a lay-up mooring with a tarpaulin over her to keep the weather out. On a recent high tide she was floated off and towed to a local boatyard and lifted out.  Now chocked-up in the yard work can commence.


First jobs are to strip the paint and tar from her bottom to assess the condition of her planking and to get some timber and fastenings on order to replace a few of her broken timbers. 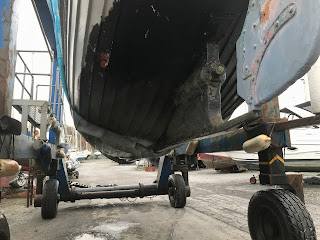 She is currently engineless so I will concentrate on interior repairs and painting. There is a lot to do and I would like to source some hardwood to make new thwarts, side benches, lockers and engine casing.

Work continues on 'Pintail'... After a lot of rubbing down and a good clean out her interior was given two coats of varnish.  She has now been turned over and placed on trestles so her bottom could be cleaned and rubbed-down for fresh varnish.
There are a couple of spots where fastenings have been corroding that have been cleaned up and treated before being primed with thinned varnish.  A good rubbing-down with wet-or-dry 400 grade used wet on the topside and 320 grit used dry on her bottom and she was ready for varnish. Two coats applied coat-on-coat with a day between coats. 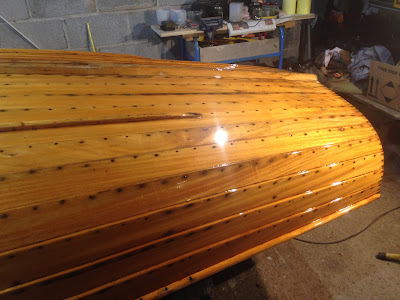 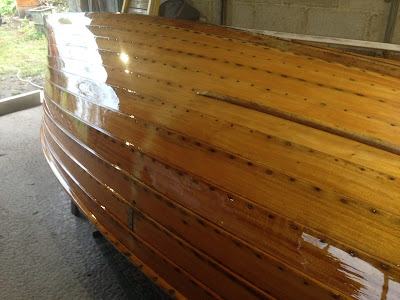 'Pintail' our National Redwing dinghy is thirty years old this year and in preparation to celebrate her birthday she's getting a re-varnish and spruce-up this spring.

All the interior gear, floor-boards, buoyancy bags and fittings have been stripped off and the hull given a good wash and scrub inside and out... 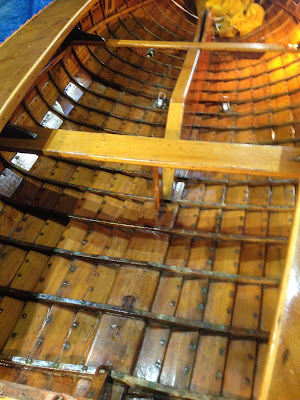 .. Followed by the labourious task of flatting back the varnish. For this I'm using 180 grit paper.  It's a bit coarse for varnish re-finishing normally but on the fiddly and rather rough bits that are normally out of sight I feel that getting a good 'key' for the new coats is preferable to use a coarser grade.  They say that varnishing is 90% preparation, 10% application; how true that is. 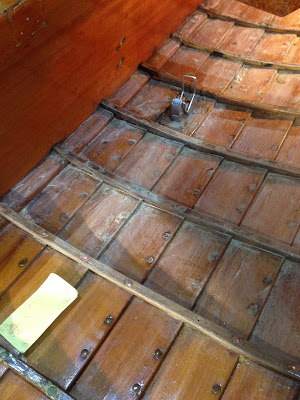 That's all just for now; got to get on with rubbing down...

Making a mast and painting

I had a small but heavy spruce mast and spars from an old balance-lug from which the sail had long rotted-away. However, she needed a mizzen-mast of about 9' long and I decided to have a go at making one. I had a couple of 18' lengths of 3/4" by 1 3/4" douglas fir left over from the repairs to the boat and these were cut down and glued together.
These were planed square and then marked with a taper..
﻿
The mast taper was planed on with the spar still square.

A spar gauge was made up to mark the spar for planing and it then becomes eight-sided.

The faces were then numbered 1-3-5-7-9-11-13-15 with odd numbers only. This was done to avoid missing one corner whilst turning the eight-sided spar to sixteen..

Spar planed along its length till it became sixteen-sided. Then re-numbered...

Planed again on every corner till it is now at least 32-sided...

Finally a good deal of sandpapering with a coarse grade produced a smooth, round spar.

Well, not quite; it required the head to be rounded and a sheave cut and a taper and heel cut to suit the step and it was given a few coats of Danish Oil.

Now with the boat in the shed I was able to get on and finally paint her. All the new wood was sanded and primed and a couple of coats of white undercoat applied to the above-floor areas followed by a coat of white gloss. The bilges had previously been painted with grey 'Danboline'.
Seats and thwarts had a coat or two of 'woodskin' over the previous coats of 'Sikkens' - I'm trying this in place of varnish - not so glossy but might be easier to maintain.
The topsides were undercoated and painted with a gloss and the bottom painted red. There was no waterline marked on the boat and I spent a whole day with a tight string, level, square and rule transferring a line to the sides of the boat based on where I think she was floating.

Finally she's finished and rolled out of the shed.. 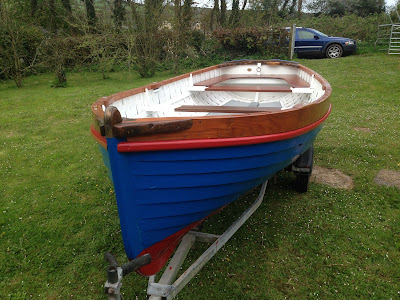 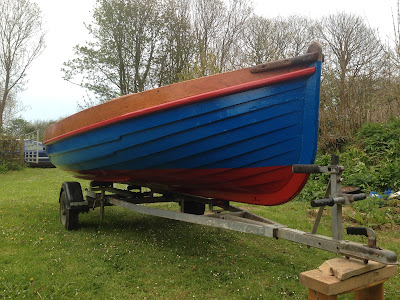